I’m pretty behind on Inktober this year. I’ve managed to get around eight illustrations done, however. Here’s number 1 🙂

It goes on and on and on. Switching the skin inwards then backout. The thing twists what’s meant to stay hidden and shows anyone curious enough to peel away their own flesh for free. Free. Everything’s free. That’s what the thing says but it stands to reason that prices aren’t always monetary. Doesn’t cost a cent but once it’s inside it’s already too late. Millions of eyes will watch your every move. But you’ll never feel their claws peeling back the skin. Hordes of keys clack away and detail every link you click, ad you like, and pornstar you eye-fuck.

Transparency. They watch, learn, then manipulate your thoughts. The thing feeds you drivel through a scrollable pipeline. It’s all free, too, by the way. Post your skin so they can use you too. Nothing could be wrong if all your friends’ hang their skin out to dry right alongside yours, right? Not when they all dress up their skin to the point of lunacy; a lie. Blatant, black, and to your face; they’ll lie. Make it out to be perfect. The only thing that knows who we are is the thing manipulating us into factory grade pigs. Ready to be churned and turned out for ad revenue. Little capitalist fingers pick and pluck all the right strings. Another piece of my long standing zodiac project. This one means a lot to me. One of my best friends fell thirty feet in a climbing accident and hit his head on a rock. It took the doctors three days to determine he was brain dead. They took him off support last Saturday. He was a Gemini and my friend Kendra and I created a unique version of the image for his birthday, which was a week before the accident. He never got to see it finished, but I think he would’ve liked it. He was always supportive of my art. He was probably my only fan when I first started. He was just a good friend, always there for me, even when I wasn’t there for me, and even when I wasn’t there for him.

Some minor issues, but we’ll fix them. One of my first attempts at a piece with an invisible background (not easy the way I paint). My style breaks down in cleanliness a little when you take away the background which I usually use for positive and negative space interplay, but this came out alright. It’s a little confusing to look at but it’s also a T-shirt design and I kind of like that it looks like a simple shape from far away but is also rather detailed up close.

It’s a mixed media piece. The women were done in ink while the buildings were photo manipulated into a fractal pattern. The pain splatters and textured splashes were painted digitally. 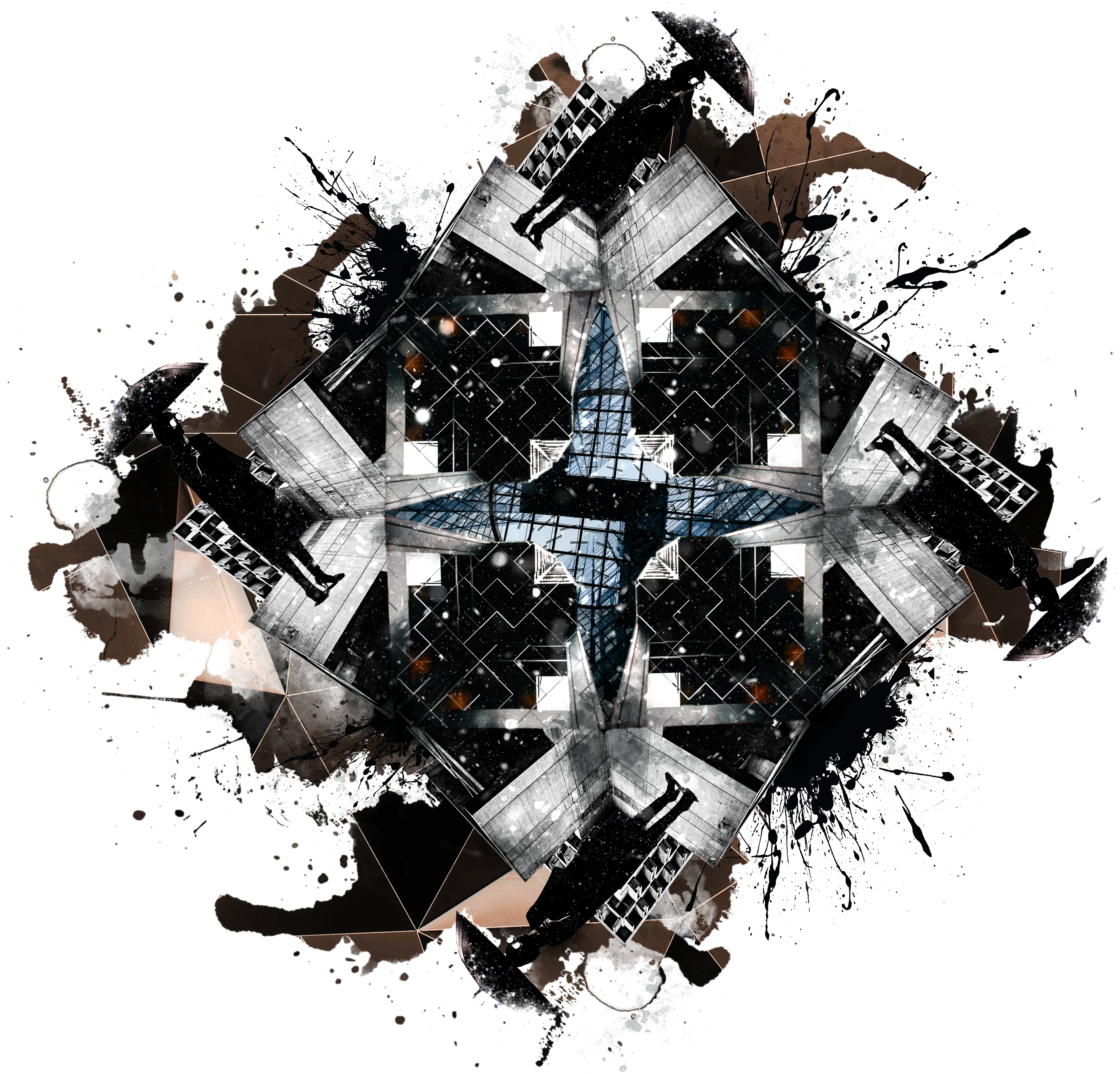 Here’s some examples of how it looks printed:

Anyway, had a lot of fun putting this together between exams and ER shifts this weekend.

Here’s a link to the store page if anyone is interested: https://www.designbyhumans.com/shop/t-shirt/men/metric-rain/952154/ 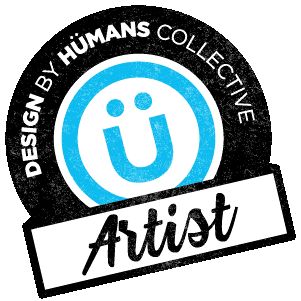 The form is meant to mimic the inkblot of a butterfly, which follows the time-related elements of the novel.

I worked on this alongside another recent piece, Winter, and I think the style is very similar. You can find that one here: https://arctic-ink.deviantart.com/art/Water-Mage-Full-Size-741323220

My Design by Humans shop: https://www.designbyhumans.com/shop/ArcticInk/ 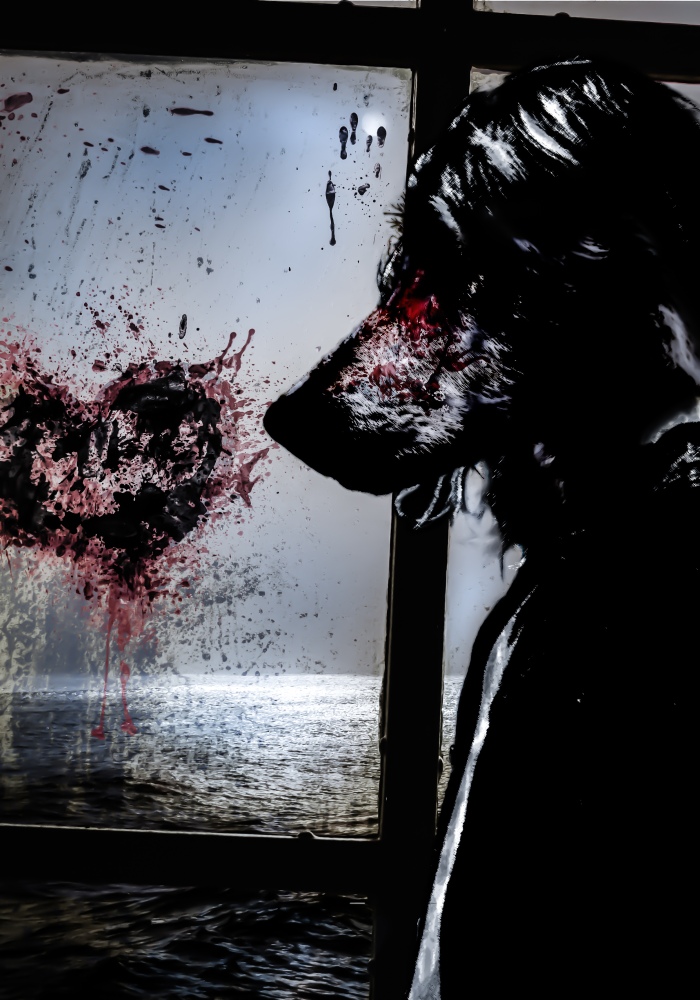 This was deceptively complicated to figure out and structure. I struggled quite a lot with making the face not derpy and even tried out using fur textures. Ended up running the opposite way and killing most of the detail on the wolf person to draw focus to the emissive window I put together (as it was much cleaner and ultimately more interesting). 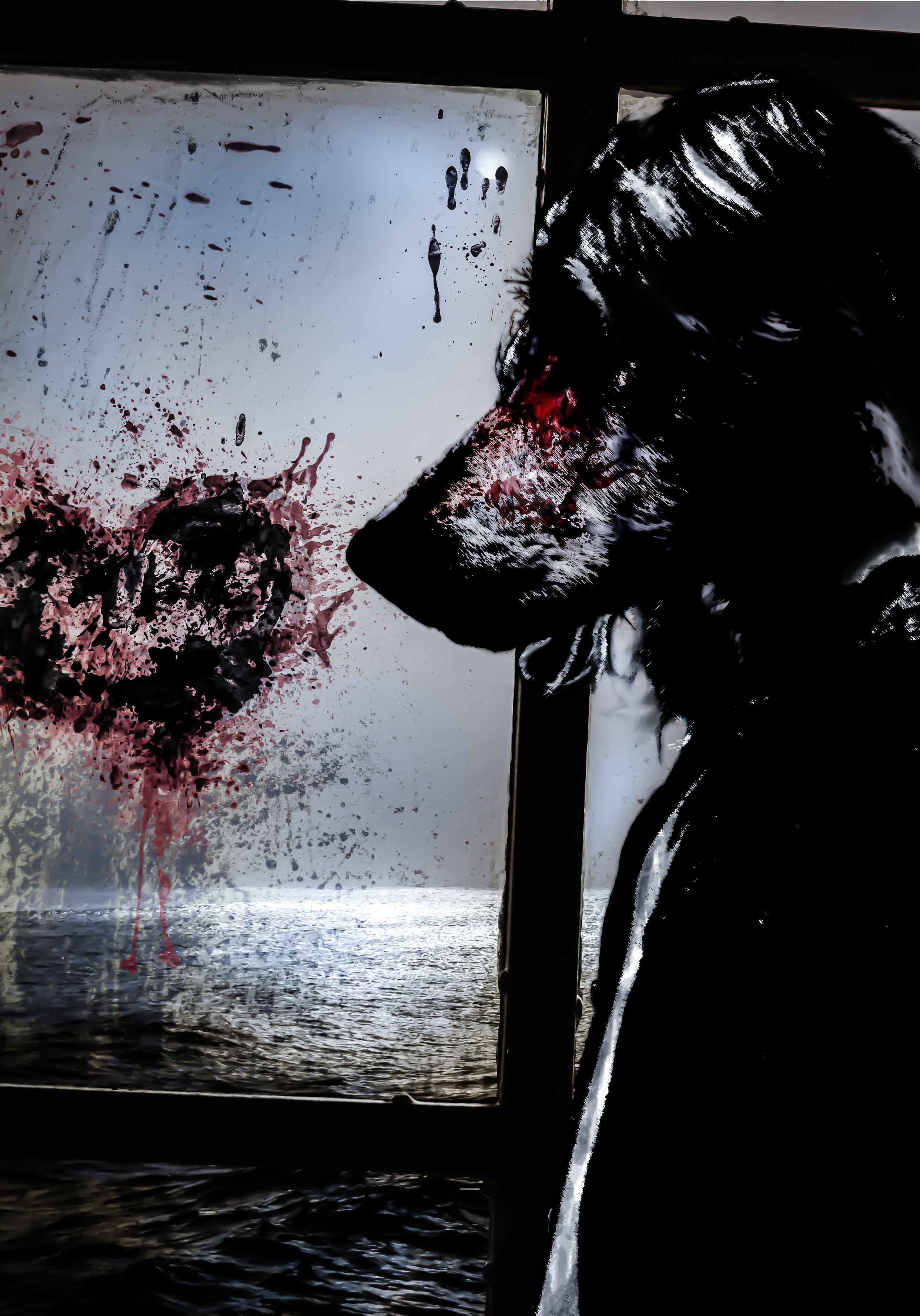 So this was kind of a weird challenge, I wanted to make a trippy wallpaper, but instead of “drawing” it on a blank canvas like normal, I wanted to see if I could do the majority of it in textures, on a texture. In other words turn a benign leaf into a spooky water dragon.

SO, this was my canvas (licence free). lol…

I picked something hard on purpose, as a rule I wasn’t allowed to erase any part of the canvas. I had to turn this leaf into the eye of a dragon.

Here’s the thirty layers of shading and textures I added to my already busy canvas:

I needed really heavy blacks to obtain any sort of com-positional balance. That was already void from the leaf photo. So I blocked out the blacks and sketched the form of the eye, making sure to keep the important parts away from the leaf’s busier channels. The main challenge was molding the shading around to fit the leaf, because it’d be very easy to blow out the wrong areas. For this reason, my shading and structure probably looks very rudimentary and inconsistent, but this has more to do with drawing around the problem areas.

How it turned out: 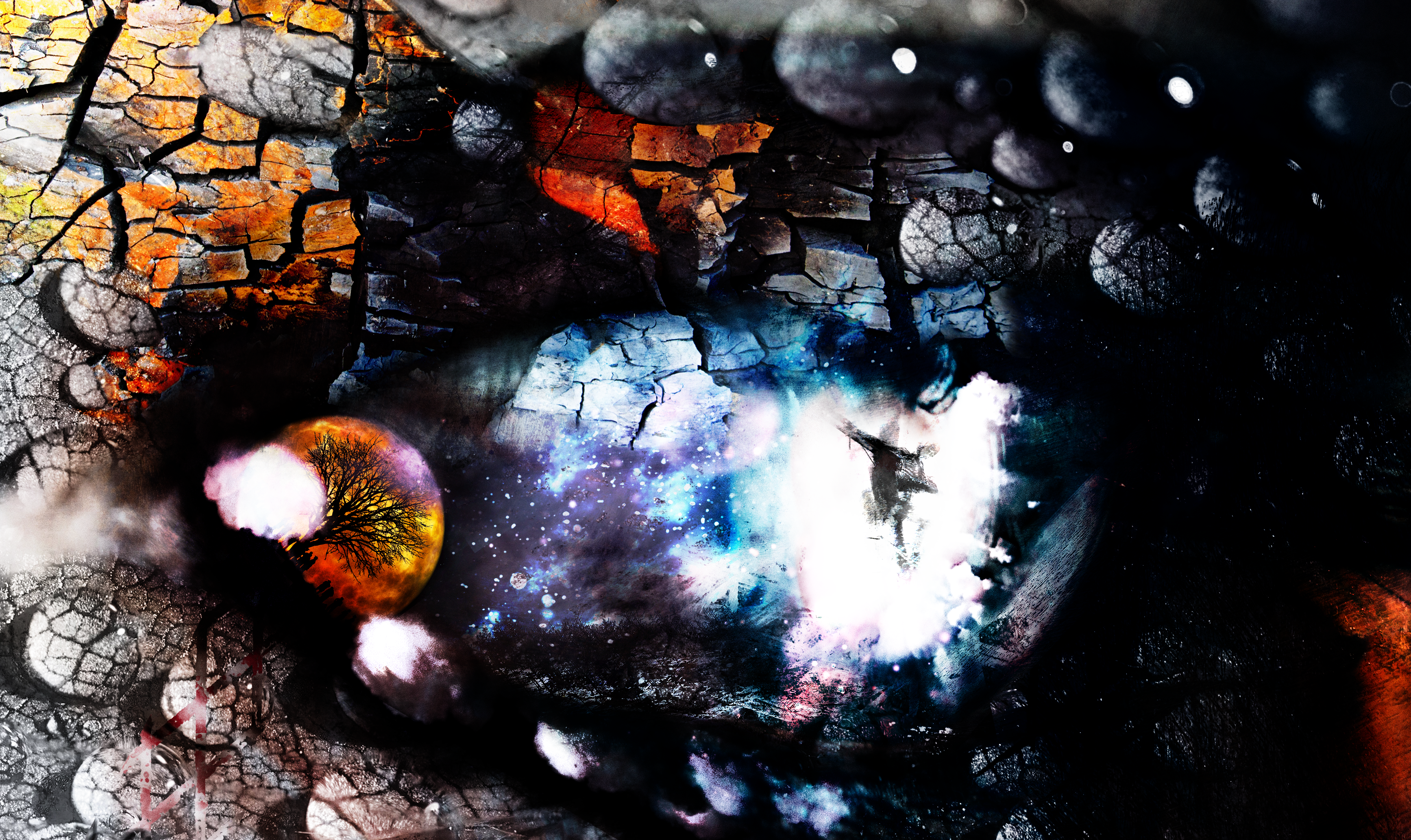 I’m pretty happy with the result. It looks…weird. The water droplets on the eyelid don’t really make sense but they look cool if you don’t think about it, and my heavier mix of textures on the eyeball alongside the quick sketchy drawing of the skeleton on the crucifix ended up looking pretty intense. It is admittedly a cluster-expletive and completely unbalanced in a lot of ways, and it could use some cleaning up. But given the restrictions and how unmanageable that leaf photo was, I feel good about it. And being real, it does have a rather unique look. 🙂

Anyway, feel free to use this image for whatever as long as you credit me. If anyone wants the .psd or a .tiff format (full size) version of the image, be warned that it is seventy megabytes, but I can send it over google drive or something.

PS: I’ve had a few blog posts accidentally be released unfinished because I’m dumb and forgot I scheduled them. I’m going to stop slotting unfinished things assuming I’ll get back to them at some point, sorry for spam!

Having recently completed the general and rough manuscript for Butterfly Gate and passing it off to a trusted editor, I suddenly have time to work on my other stories and art projects. Re-reading and editing the same 460 page story three times within a week is hard work, but also really engaging and fun for me.

So this week (Spring Break!) has been all about planning new art for my other work-in-progress Saving Hadley and tackling a new arc. I also had time on the side to start writing my third project, Wall-Spider in a more serious capacity. As soon as I finished the rough short story (now chapter one of Wall-Spider) I knew I wanted to take it farther, but I already had a few engulfing projects. It was great to really delve into developing a new book, and infinitely less stressful than the first two times.

It’s a little mind-blowing and encouraging how visible the improvement has been. I started by  re-working the short story. It wasn’t bad, but it wasn’t up to my current standards or style, so I improved the flow and counter-play between the first and third person narration. Then, having a good six months of ideas and notes about where I wanted to take it, barfed out a cool sixty pages, which was a new record for me.

But there’s other clerical work I do when I approach a novel. Part of that was taking the art I’ve already done for Wall-Spider and reworking it.

The main challenge was retroactively fixing the perspective issues with the first sketch. Then I drew as realistic of a padded cell backing as I could in Photoshop. The rest was simple lighting.

Obviously there are still some lighting and perspective issues, but I felt good about it for a simple three-hour session. One of the main takeaways from this for me is to really spend more time planning perspective. Messing up the two-point as badly as I did on a drawing that was otherwise very solid and emotionally personal/important to who I am was a little silly. I could have avoided the issue by spending two minutes with a compass to measure the two-point, but I free-handed the lines and rolled with it.